Throughout the business day, finance experts and internet economists weigh in on the direction of our economy and whether we’re headed for a recession or whether inflation or even stagflation, will be the soup du jour. Like most things in this digital age, you can usually find a source to agree or disprove your thesis on these matters, but we want to try and cut through the noise and share some insight into where we think the economy, interest rates, and the markets are headed.

Interest rates, an inverted yield curve, and the Federal Reserve

I think we know that bonds pay investors interest or yield on what is borrowed. The amount of interest paid to owners is generally based on how much time the money is loaned, or the maturity (duration) of the bond. It can also depend on the credit quality of the underlying company, government, or mortgage, but that’s for another conversation. The shorter the duration, the lower the yield. Below is a drawing of a normal yield curve, with yield on the left (Y axis) and years to maturity on the X axis. The yield on a short-term bond is less than a longer-term bond. So, what does an inverted yield curve mean? It’s the opposite of normal where the shorter the bond term, the higher the yield paid. What is the impact of this inversion and why do we pay attention to this? 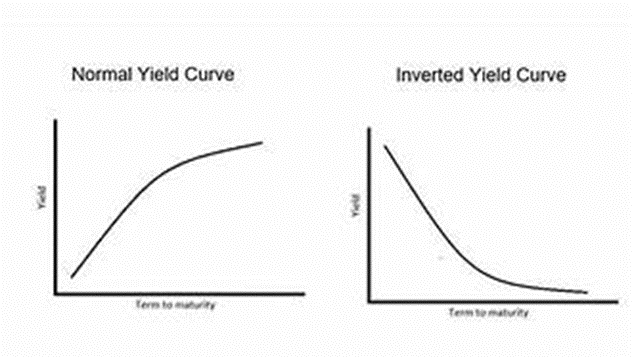 What that means in technical terms is that short-term debt instruments yield a greater return than long-term instruments of similar credit risk. It is also a notable proxy for an impending recession. It is a rare occurrence when yield curves invert, but there is nuance here worth understanding.

The bad news is that inverted yield curves have preceded every recession since 1955 with one exception in 1960.

The good news is that this latest occurrence wasn’t prolonged enough to draw much from conclusively. Studies have shown that inverted yield curves have remained inverted for at least a week when those recessions resulted. That indicates that fears could be overblown.

So, what happens if those yield curves invert again and stay inverted for a week or more? The answer there is also nuanced. But if history is an accurate indicator, a weeklong inversion should signal a recession that will last anywhere from six months to two years.”[1]

There are other unusual indicators to watch to determine if a recession is on deck, such as the “lipstick effect,” where sales of lipstick tick up during rougher economic times as people spend money on small luxury items to boost morale. Or the “men’s underwear index” where sales of men’s underclothing slow as this is generally an item men wait to buy anyway, and do when times are good, but during financial stress will forgo replacing their preferred coverings.

Or another favorite – the “hemline index.” “The “hemline index” emerged on the back of a thesis in the 1920s by Wharton Business School economist George Taylor. The theory is that skirts become shorter when markets are on the rise and longer in downturns.

The economic exuberance of the 1920s and the appearance of knee-length flapper skirts, along with the emergence of the mini skirt in the 1960s amid stronger financial conditions, have been cited as examples to support this theory.

However, there have often been questions raised over its credibility.

A study published in 2010 by the Erasmus School of Economics Econometric Institute, in the Netherlands, collected monthly data on hemlines between 1921 and 2009.

“The main finding is that the urban legend holds true but with a time lag of about three years,” the authors of the report said.”[2]

All of these strange indicators may be fun to listen to, but the lesson here is that the real economic driver is the consumer and our sentiment towards spending, and we’re starting to tighten our belts as high inflation takes a bite out of our financial comfort zone.

Whatever the economic indicator used, the Federal Reserve’s toolkit to combat inflation includes the ability to raise interest rates. They’ve already raised them .25% last month, and all indications are that the next increase will be .50% in May and possibly in June, with a total of seven increases a possibility this year. With February’s inflation rate at 7.9%, the highest in 40 years, the Fed is walking a tightrope on slowing inflation without bringing economic growth to a screeching halt, moving the possibility of a recession even more probable. They’ve admitted they’re behind the eight-ball already, but they’re ready to do what it takes to get inflation back to their preferred 2% growth rate. It is doubtful we’ll get there by the end of this year, but most economists feel we can get to around 3%.

As of last month, there were five million more jobs available than people looking for work, and if companies decide not to borrow to finance their growth due to higher interest rates, what do you suppose will happen to the low unemployment rate we’re experiencing? Yep, you guessed it, that could push companies to cut employee ranks, increasing unemployment ranks. High inflation, combined with higher unemployment rates and slowing economic growth equals stagflation, a term we don’t hear very often.

Forecast – Stormy with calmer days later in the year

We look at all these charts, indicators, metrics, history lessons, and prognostications to determine whether a short-term course correction is needed in your portfolio. We’ve shortened the duration of our bond holdings, and we’re balancing the types of stocks we own between growth companies, which are more sensitive to interest rate increases, with value companies that tend to outperform growth during these times. We look at a higher allocation to defensive stocks, not like Boeing or Lockheed Martin, but rather those companies in health care, consumer staples, and utilities that if we’re in a retrenching economic cycle like a recession, tend to stay steady. This is a shift from growthy tech stocks that have outperformed value for many years, such as the FAANG stocks (Facebook (Meta), Amazon, Apple, Netflix, and Google, known as Alphabet).

To sum up our forecast, we think our friends at JP Morgan said it best – “Don’t let how you feel about the economy overrule how you think about investing.”

For many Americans, 2022 has begun in a troubling and disappointing way with the Omicron variant prolonging the pandemic, rising inflation, and the shock of Russia’s brutal invasion of Ukraine. This, combined with a still very partisan political environment has driven consumer sentiment down to its lowest level in over a decade.

When investors feel gloomy and worried about the outlook, their natural tendency is to sell risk assets in general and stocks in particular. However, history suggests that trying to time markets in this way is a mistake. The University of Michigan Index of Consumer Sentiment, stretching back over the past 50 years has eight distinct peaks and troughs noted. We also show how much the S&P 500 went up or down in the 12 months following the peaks or troughs. On average, buying at a confidence peak yielded a return of 4.4% while buying at a trough returned 24.5%.

This is not to argue that U.S. stocks will return anything like a 24.5% return in the year ahead. Many other factors will determine that outcome. However, it does suggest that in planning for 2022 and beyond, investors should focus on what they own and valuations rather than when to buy and sell and how they feel about the world.”[3]

In the end, what is most important to us is keeping our eye on the prize of helping you meet your financial goals. Please let us know if you have any questions or concerns as volatility in the markets is expected to continue for a while.